The Aberaeron and Tregaron branch in attendance at the Lampeter Food Festival on 29th July 2017 and the Lampeter Show on 11th August 2017.

Am Emergency First Aid at Work Course was held at Y Talbot, Tregaron on 17th May 2017. There were 11 attendees, and Heather Holgate (Agent) was one of them (pictured above). 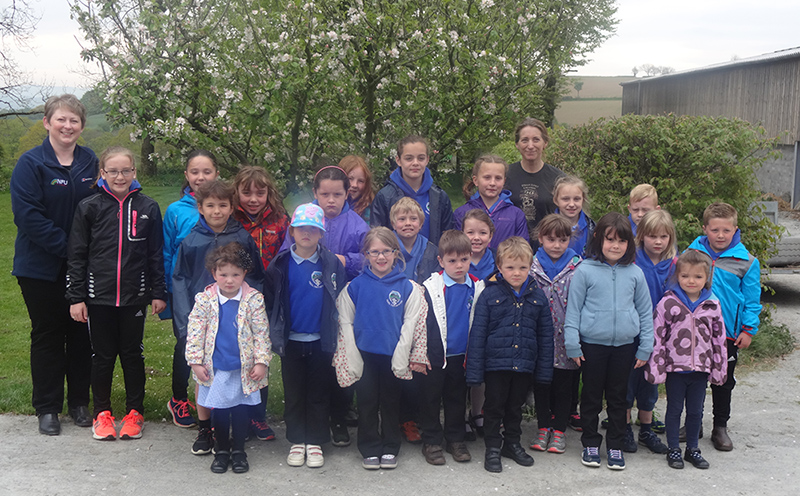 Lucky school pupils from Ysgol Gynradd Cwrtnewydd, Ceredigion, were shown how Hafod Cheese is made during their visit to Holden Farm Dairy at Bwlchwernen Fawr recently. The trip was the school’s prize after one of its pupils, Megan Davies, aged 8, won last autumn’s Welsh Dairy Show ‘Story of Milk’ poster competition.

The Year Four pupil won the competition for her colourful illustration of how milk travels from the farm to the fridge entitled ‘Taith y Llaeth’. Megan’s winning drawing appeared on the front cover of the Show Catalogue which was given to the 1,000s of visitors to the show on entry.

Megan’s prize consisted of tickets for her family to visit the Welsh Dairy Show; £75 for Cwrtnewydd Primary School, which was sponsored by Mole Valley, and a trip for her class to visit Hafod Cheese factory. As there were less than 20 pupils in the whole school they all went on the trip. Local NFU Mutual Group Secretaries Heather Holgate, in Tregaron, and Aled Davies, in Aberaeron, sponsored the bus which took the school pupils to watch Hafod Cheese being made at Holden Farm Dairy at Bwlchwernen Fawr.

Heather Holgate, who went on the trip with the school pupils said, “We were delighted to be able to help with the cost of the trip for Cwrtnewydd school. It was fantastic to see how much the children enjoyed learning about how cheese is made.”

Ysgol Gynradd Cwrtnewydd Headteacher, Carol Davies said, “We are very lucky to have such amazing artists amongst our pupils. We are very grateful for all the prizes we won as a result of Megan winning. We will certainly be entering the competition again this year.”